Our News
You are here: Home1 / Our News2 / Porch Light Blog3 / The Beacons: Stories Worth Sharing4 / Community gives back to Five Graham Street resident 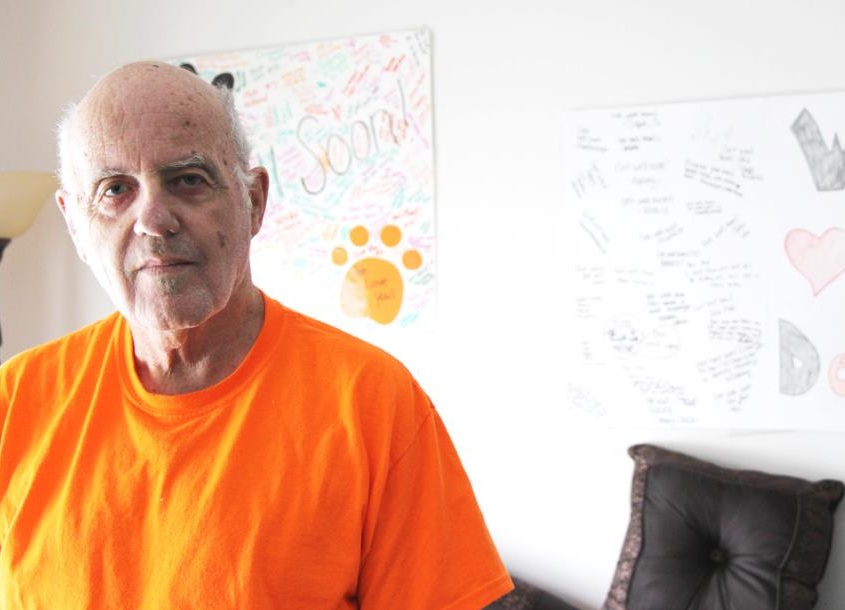 Robert Desjardins is known throughout Biddeford as the city’s number one sports fan, and when you step into his apartment at Avesta’s Five Graham Street community, it’s easy to see why.

His walls are adorned with photos of Biddeford sports teams, some signed by the players, and snapshots of him posing with coaches and athletes. An orange-and-black blanket — Biddeford’s colors — is draped over his couch, next to a seat cushion that screams, “Biddeford Tigers, GO!”

When I visited him recently, even Desi — as he’s known around town — was wearing an orange T-shirt as he pointed out his Biddeford sports keepsakes: a varsity letter framed on his wall, decorated with pins for each sport and a sign proclaiming “#1 Fan”; a collection of more than 100 scrapbooks stacked in his closet filled with newspaper clippings of game write-ups and honor roll mentions, dating back to 1966. I heard about Desi’s story from our maintenance technician, Richard Hodgdon, whose work allows him to get to know our residents well.

Desi, who’s 70, played basketball and ran cross country for Biddeford High School. He’s lived in Biddeford all his life, and at Five Graham Street for six years. He goes to as many home games as he can, no matter the sport, boys or girls. His connection to the community, the athletes and their parents, runs deep.

“I’ve always known the people here,” he says. “The kids are great, the parents are great too.”

The feeling is mutual among the parents of Biddeford athletes.

“The community just adores him,” says Julie Maloy, who first met Desi a decade ago when her son was in Little League. “He gives so much by just his love for our kids.”

Now the community is giving back to him. In November, Desi underwent a five-bypass heart surgery and spent more than three weeks recovering. While he was in rehab, Julie and other parents took the opportunity to do something special for him. The group bought Desi new living room and bedroom furniture, dishes, microwave, and televisions — one for the living room, one for the bedroom. Julie says as many as 100 people volunteered or gave money. The athletes made Get Well signs that now hang in Desi’s apartment.

“I was pretty surprised, pretty touched,” says Desi. “Those parents are amazing, they really are.”

While Desi is still getting back his strength, the parents take turns cleaning his apartment on weekends, taking him shopping or to appointments, and making him meals. The weekly meal schedule started Dec. 3 and already extends through May, with no family repeating a week.

And, of course, no one goes to a sporting event without picking up Desi first. And Desi says he’ll be in the stands no matter what.

“I try to be positive even if things aren’t going well,” he says. “You’re not always going to win. I’ve been there when they win the state championships and there when they haven’t won a game.” 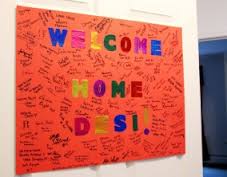 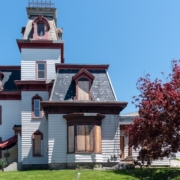 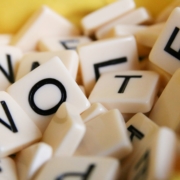 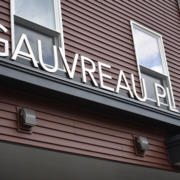 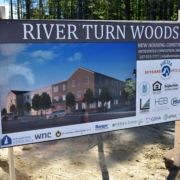 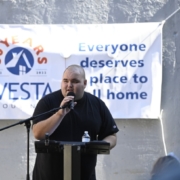 Seniors enjoy a chance to eat and socialize at Community Cafe